The revival of Villa Helios

An old rest home transformed into high-end housing in Grasse

Built in the 1920s, Villa Helios was home to many patients with respiratory ailments. At the time, the city of Grasse attracted for its climate.

The villa, intended for men, had 7 levels, 45 rooms and a very large park. Unfortunately unoccupied for about twenty years, the former rest home had given way to a place of expression for street artists, giving it a completely different charm.

Today, this is ancient history as the building overlooking the world capital of perfume is going to be given a whole new lease of life and thus be restored. It will offer high-end housing, more precisely, 11 luxury apartments on 1,400 square meters of space; 36 parking spaces will also be created.

Facilities that have evolved over time

Several stages were inevitable and essential to the realization of this project. Firstly, in order to correct the purpose of the building, the local urban planning plan had to be modified. Indeed, it was mandatory that this building remain a hotel according to Nathalie Campana, Deputy Director General of Urban Planning. As a result, it was transformed and thus intended for housing. Specific access for people with reduced mobility was also imposed, as was compliance with certain standards.

Then, partners had to be appointed in order to carry out this project.

Thus, the architecture firm Atelier Aïno and the developer Saint-Roch Habitat, in charge of rehabilitating the building, will require two years of work to complete the project and carry out these amazing transformations. Their role, supported by the local authorities, is not the least important: "to give a second life to our heritage". The objective is to pass on rather than replace, according to Pierre Blanchard, president of Saint-Roch Habitat.

Many elements will be preserved. Thus, the glass roof, the facade, the bow windows, the marble staircase and the elevator shaft will be restored.

The 11 luxury apartments will all have a beautiful terrace, a sublime balcony or magnificent gardens and will all be offered for sale.

A sumptuous wellness area will complement the beautiful amenities of this historic building.

A truly exceptional place, Villa Hélios has a unique potential. With its remarkable transformation, it embodies a real promise for the city of Grasse. 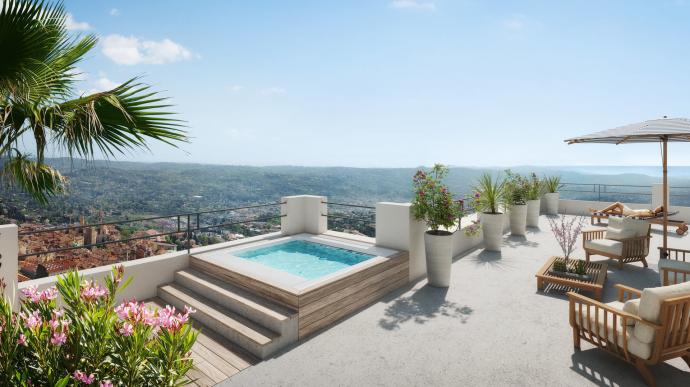