Buy a villa in Grasse

History of the commune of Grasse, the capital of perfume

A millennium has already passed since the beginning of the existence of the city of Grasse. The origin of its name, which still exists today under the name "Grand Puy", would then come from "Podium Grassum": rock on which the city was built. It was only in the 10th century that the town obtained its independence and in the 12th century that it became a free commune, governed by consuls. In the 13th century, the Bishop of Antibes, wishing to flee the coastal areas in order to avoid recurring attacks, finally established his bishopric there.

Thus, Grasse evolved into an extremely powerful city, able to deal with Genoa, known for its port embodying one of the most important in the Mediterranean. In addition to its fruitful exchanges, the city has an unparalleled advantage: its geographical location. Indeed, situated at the crossroads of the road from Italy to Draguignan and the paths from the Alps to the sea, the city has a strategic interest, known to all. This is how the Count of Provence took over the town, leaving, in spite of this, freedom and privileges to its inhabitants. Grasse then embodied the centre of a real judicial and administrative district and, by the sedition of the County of Nice to the Savoy in 1388, Grasse gained more power. Situated near the river the "Var", a real natural border with the County of Nice, it became a key border location. Also, rich of its culture of flowers, fruits, olive oil but also of its tanning industry and its exploitation of skins, the city can indeed thank its geographical position but also its micro climate.

It was in 1481 that it entered the Kingdom of France and the perfume industry developed there. Its natural resources, which quickly gave the town a new lease of life, enabled it to move from a simple craft industry to a real industry by the end of the 18th century. Today, Grasse is the world capital of perfume and aromatics.

The assets of the town

With nearly 4,500 hectares and 50,000 inhabitants, Grasse embodies one of the largest municipalities in France. Its main industry, perfumery, which has extended to aromas, has been modernized and internationalized throughout history. The local production of perfume flowers is of exceptional and, above all, unique quality.

The old centre of this charming commune gives access to pleasant walks through the narrow, steep streets. It is thus possible to admire old medieval stone houses that are very well preserved.

The ground of the commune is covered with bronze nails, with the arms of the city, allowing to guide the steps of the inhabitants but also of the tourists.

Known for its cultural and touristic richness, it organizes many mythical floral events such as the Expo Rose in the Fragonard gardens where works by Jean Honoré Fragonard are exhibited, or the Jasmine festival in the streets of the town. Also, exciting guided tours of the town are organised by the tourist office, led by competent tour guides. They give you access to the many museums that retrace the local history.

The International Perfumery Museum traces the evolution of techniques and is the place to be when visiting the perfume factories.

The Museum of Art and History of Provence illustrates the art of living in the Provençal way. Indeed, the history of the town is closely linked to Provence.

Finally, the naval museum is dedicated to the life of Admiral François-Joseph Paul, Count of Grasse and hero of the American War of Independence.

This sumptuous site, dominated by the magnificent 12th century Romanesque cathedral, transports its visitors back in time. Indeed, it (re)gives life to the culture of the commune through its historical events and the conservation and exhibition of its history.

In 2016, the LVMH brand inaugurates in Grasse "Les Fontaines Parfumées", the creative workshops of François Demachy and Jacques Cavalier Belletrud, Master Perfumers of the Houses Christian Dior and Louis Vuitton. A true showcase in the heart of the city, its aim is to preserve the heritage while providing the bastide with contemporary functions. Every year, it welcomes hundreds of employees from these two prestigious brands.

Specifics of Magrey & Sons properties and villa for sale in Grasse

Magrey & Sons is thus able to offer you properties in the heart of a beautiful and quiet natural environment. For example, the agency will show you a magnificent stone farmhouse in the heart of a hectare of land that is home to sumptuous horses, or the houses of famous perfumers with olive production activities. Each estate has its own history as well as its own culture. All of them embody the historical authenticity of the past. The price per square metre of the properties on offer thus defies that of all the neighbouring communes while providing access to a most pleasant quality of life.

The agency has the most luxurious properties in the heart of the most prestigious districts of Grasse such as Saint-François, Saint-Jacques, Saint-Jean, Saint-Mathieu and Plascassier. Indeed, since the first half of the 18th century, these places have been home to great estates steeped in history, formerly owned by great names of perfumers, celebrities and even major industrialists. 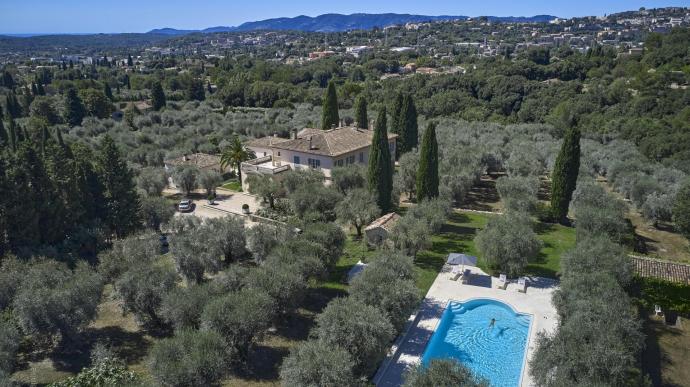