Villa for sale in Vallauris

200 years B.C, the oppidum of Encourdoules, north-east of the present city, was occupied by a Celto-Ligurian tribe who established a village surrounded by ramparts.

It was later, in times of peace known as "Pax romana", that the Romans conquered the territory, enlarged it beyond the ramparts and settled there.[+]

In the 5th century, the territory was finally deserted. Indeed, at that time, all traces of habitation disappeared.

In the 10th century, Vallauris was, like all the surrounding countries, part of the Episcopate of Antibes. It finally came under the domination of the Abbots of Lérins in the 11th century.

The Chapel of the Castle, now the National Museum, dates from the second half of the 12th century. Later, looters and epidemics ended up decimating the population of the commune, and at the end of the 15th century, Vallauris was only inhabited by the Prior of Lérins and his monks.

In 1501, Dom Raynier Lascaris, Prior of Lérins and Lord of Vallauris, gave the whole territory to families originating from the County of Ventimiglia on perpetual long lease. A plan for the reconstruction of the village was then imposed on them, giving birth to the "Castrum", which is the "old town" today.

Over the years, a real municipal life took place until 1787 when the Monastery of Lérins was secularized. On the eve of the revolution, the village appears as it is today and begins to expand towards the current centre.

It is then in 1815 that Napoleon landed and in the 19th century that real urban planning work was carried out, bringing about the transition from the Middle Ages to modern times.

Numerous technical and social advances then took place in the 20th century. Indeed, in 1899, the tramway was installed and the boys' school was built. The girls' school was opened in 1908. A real revolution appeared in 1919 with the arrival of electricity.

The development of agriculture, and more precisely, the cultivation of orange blossoms, was then possible thanks to the arrival of water from the Siagne Canal in 1900. Today, Vallauris is the only town in France cultivating this tree, and thus harvesting this flower for distillation.

The assets of Vallauris

Along with cultivating the land, industrial culinary pottery has always been the main activity of the city. It then became artistic pottery and ceramics in the 20th century.

The arrival of the railway and the creation of tourism in the second half of the 19th century allowed the expansion of the hamlet of Golfe-Juan. This is how illustrious personalities chose to build, on the edge of the hills, magnificent villas in which many celebrities were welcomed.

Vallauris is a town famous for its ceramics, which attracted many famous artists to settle there after World War II. For example, Pablo Picasso left beautiful legacies such as the "Man with a sheep" or the fresco "War and Peace", now in the National Museum. Thus, many personalities are linked to the town.

It is thus recognized as a city full of talent and cultural and environmental wealth.

Whether it is seaside or cultural, Vallauris is a real tourist centre. Economic activity there is stimulated by the Sophia Antipolis technology park, which brings together many companies and research workshops.

This beautiful town is also rich in culture thanks to its many museums. For example, the ceramics museum, known as the Magnelli Museum, is one of the few places in France representing modern ceramic creation. Also, the pottery museum presents a unique retrospective of clay work, as it was practiced in the past.

Situated between Cannes and Nice, Vallauris is one of the seaside resorts still preserved with a real "village" and "family" atmosphere.

Buy your villa in Vallauris

It is essential for the agency and its team to find for its clients the most beautiful properties in each sector, and thus, in the commune of Vallauris. Detecting prestigious villas, each with unique features, remains the priority of the Magrey & Sons teams.

The agency is therefore interested in the potential of each property, such as the specific features of the property but also its geographical characteristics. This is done according to the demand of each of its clients for the most personalised service and offer. From the charming Provençal villa revisited in a contemporary spirit to the exceptional contemporary property with panoramic sea view, numerous and unique properties are then within the reach of the most demanding clients.

Magrey & Sons will be able to offer you the property of your dreams, corresponding to all your criteria, however specific they may be. 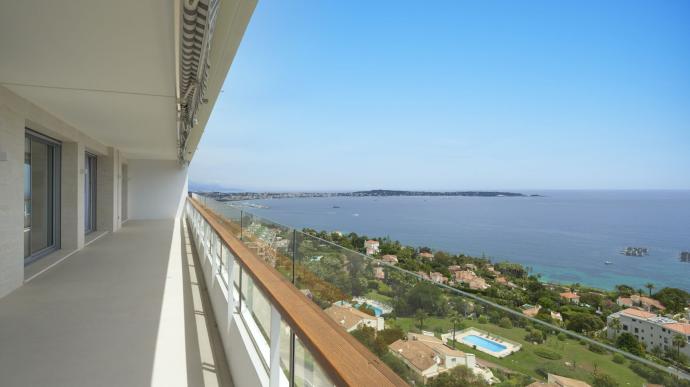